How to get free access to Disney Plus (Disney+) in Singapore

Disney+ is finally launched in Singapore with much fanfare on 24 Feb featuring performances by singers JJ Lin, Annette Lee and others as well as the single largest projection mapping show in Singapore ever (watch the launch here).

At launch, Disney+ offers over 650 films and 15,000 TV episodes with flagship content such as Avengers, Star Wars, Pixar / Disney animations, documentaries from National Geographic along with original / exclusive shows such as The Mandalorian and Wanda Vision. 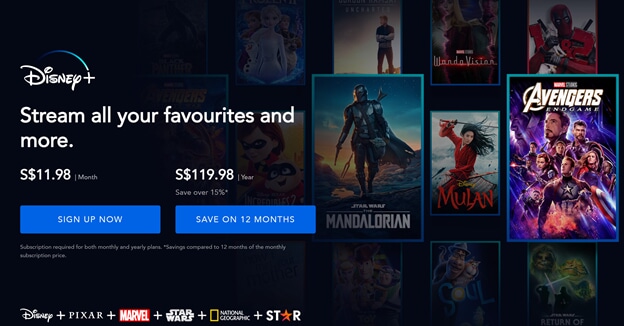 The Walt Disney Company is extremely confident in the appeal of its new video streaming that it doesn’t offer free trials, unlike Netflix which offers a 30-day free trial. Nope, not even one day and this is common for other markets as well.

Who can blame Disney when they have amassed 94 million paying subscribers since it was launched in the US less than 1 ½ years ago? As a comparison, it took Netflix 10 years to hit the 100-million mark.

So, is there a way that you can get a free subscription of Disney+ in Singapore?

The answer is yes, but of course, there’s no such thing as a free lunch.

One to two years free subscription of Disney+ in Singapore

Currently, StarHub is the only official distributor of Disney+ in Singapore. They have signed an exclusive agreement with The Walt Disney Company to bundle Disney+ with their mobile, TV and broadband offerings.

You can get free Disney+ for between one to two years from these latest promos from Star Hub (accurate at the time of writing):

Sadly, this is the way (no pun intended). There are no other ways that you can get a free trial / free access besides through Starhub.