Quantum of the Seas – Cruise to Nowhere, Unlimited Dining Package
After booking a cruise to nowhere, I was eyeing for the dining package as I was sure that my partner would love to dine at the specialty restaurants. Initially, there was only one dining package – the four-night package – was listed on Royal Caribbean’s website, and I bought it there and then at around SGD 135 per person.

To my surprise, the Unlimited Dining Package became available a few weeks later during a sale; it was offered at the same price as the four-night package. I immediate cancelled my previous purchase (no penalty) and bought the Unlimited Dining Package, which as it name suggests come with unlimited dining at any of the four specialty restaurants onboard. You could even have multiple lunches or dinners every day if your stomach could handle it.

Mind you that you with this package, you will not be able to pre-book a restaurant of your choice, hence making reservations was the first thing that you should do on board.

You can either make the reservation at any of the four specialty restaurants or through the Royal app when you are connected to the ship’s Wi-Fi.

In case you are wondering whether it’s worth it to purchase the Unlimited Dining Package – the answer is a resounding yes! I would have spent over SGD 375 per person if I were to book the restaurants individually – that’s a whopping 73% discount.

A gastronomy journey to the Wonderland
On the top of my list was Wonderland which had constantly received rave reviews for its experimental cuisine. Unlike the 2-floor Wonderland restaurant on Oasis-class ships, the Quantum-class version was much smaller and has only one floor.

I saw the receptionist turning people away when I was having dinner and saying the restaurant is fully booked for the entire cruise – it was still the first sitting of the night on day one!

This Alice in Wonderland-inspired restaurant separates its menu into five distinct categories: Sun, Fire, Ice, Sea and Earth. Initially, I thought that I could only pick one of the elements, but the waiter quickly corrected me and suggested us to pick the mains that we would like and leave the rest to the kitchen.

At the end of the night, we had seven appetizers, two mains and two desserts.

The dinner at Wonderland was easily the best meal during the entire cruise, and the service was impeccable.

I’ll let the photos to do the talking. 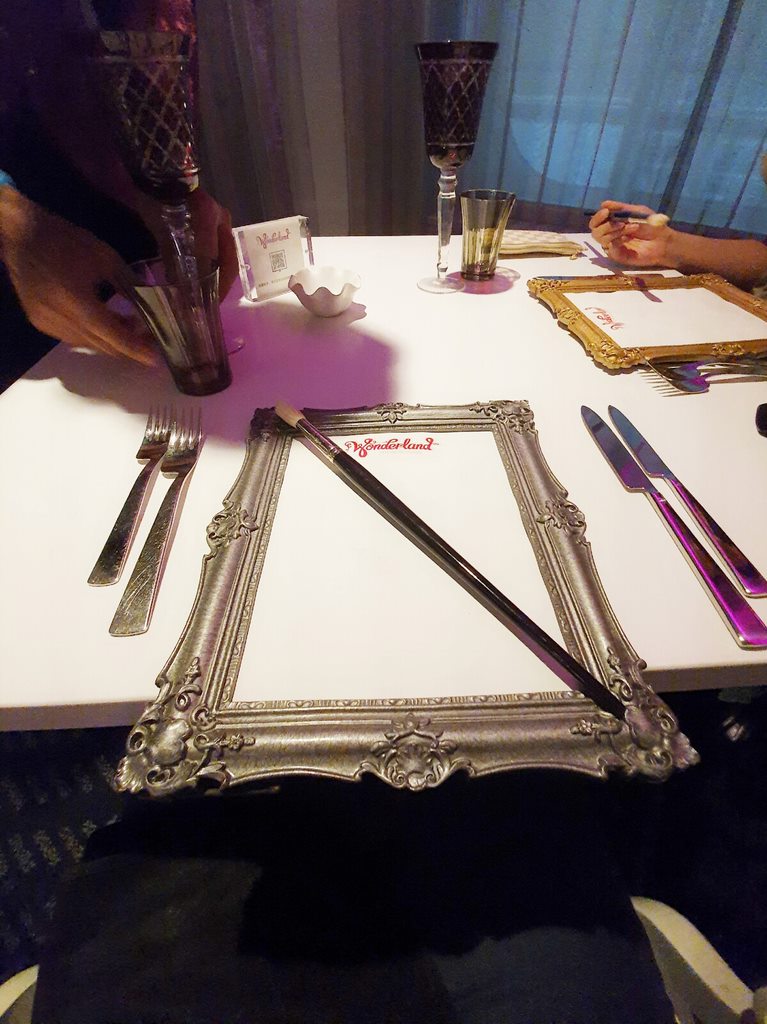 Surprise awaits. This is the menu 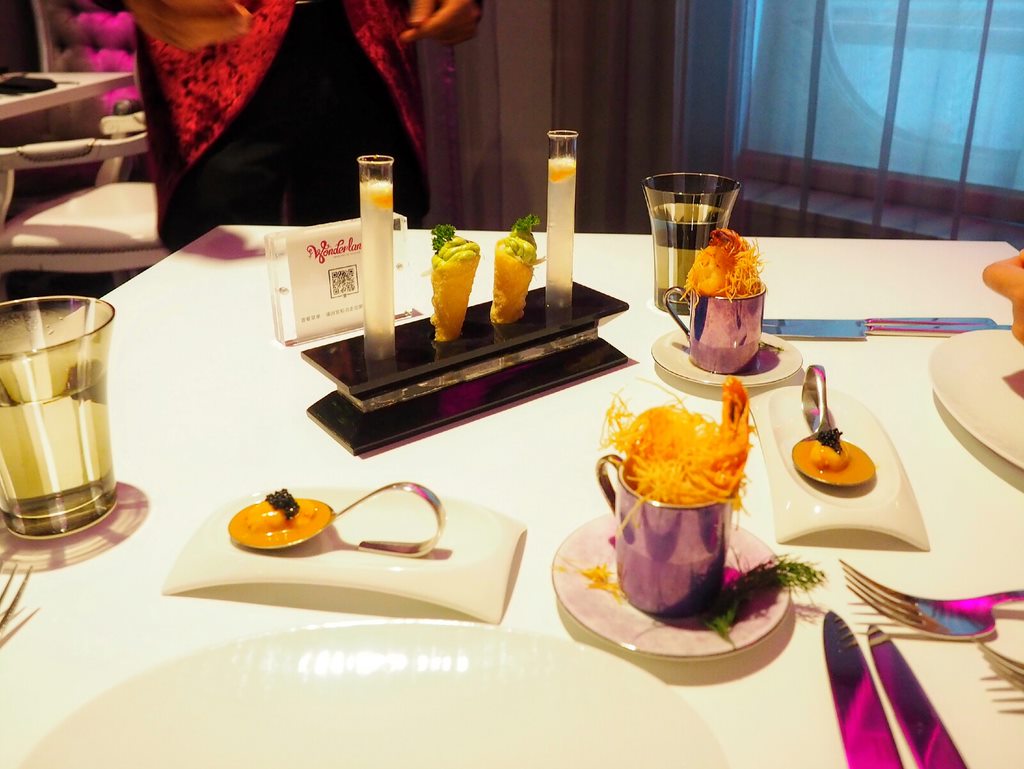 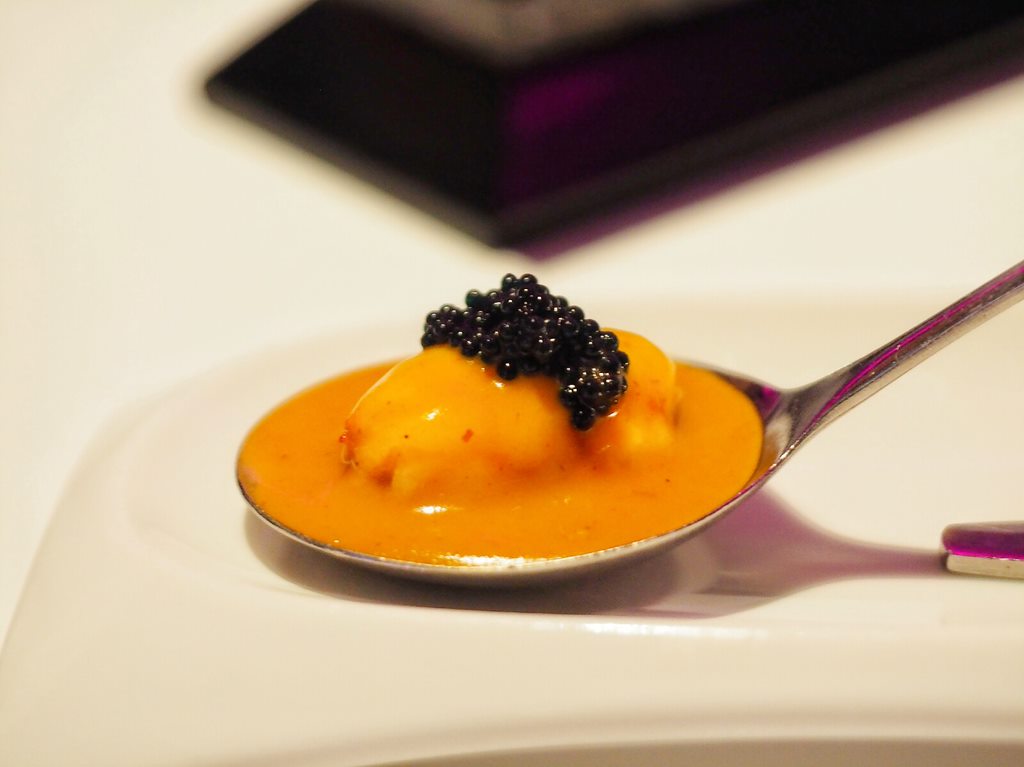 Buffalo Chicken Eggs, it has a strong smoky flavour 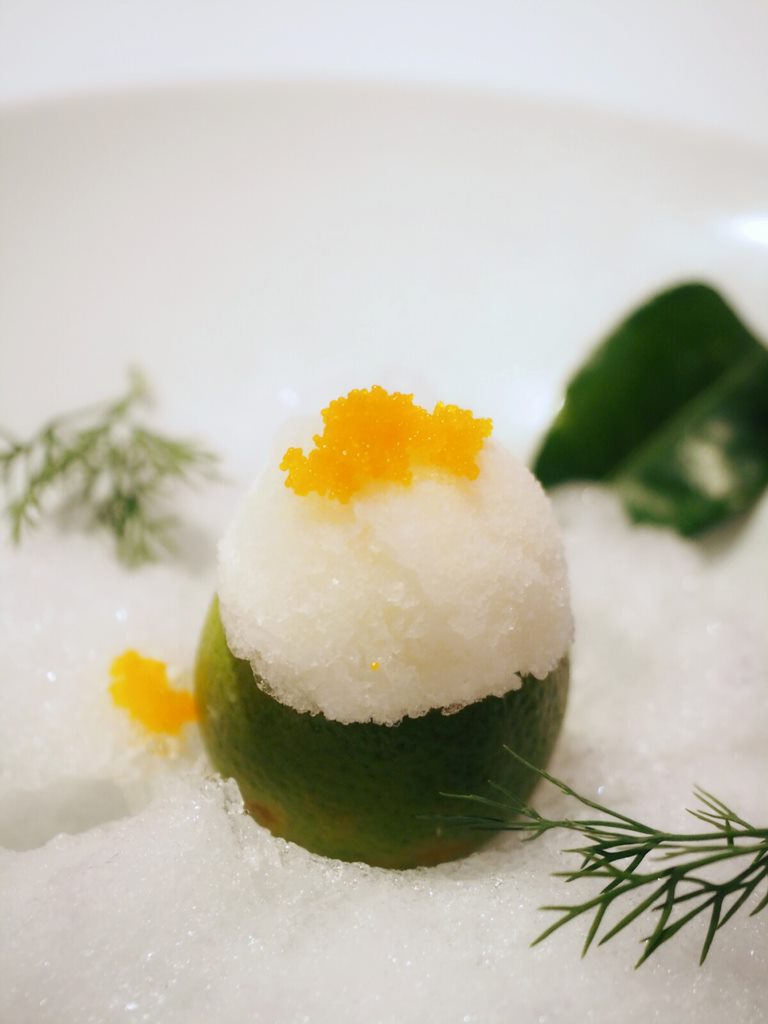 Seventh appetizer of the night 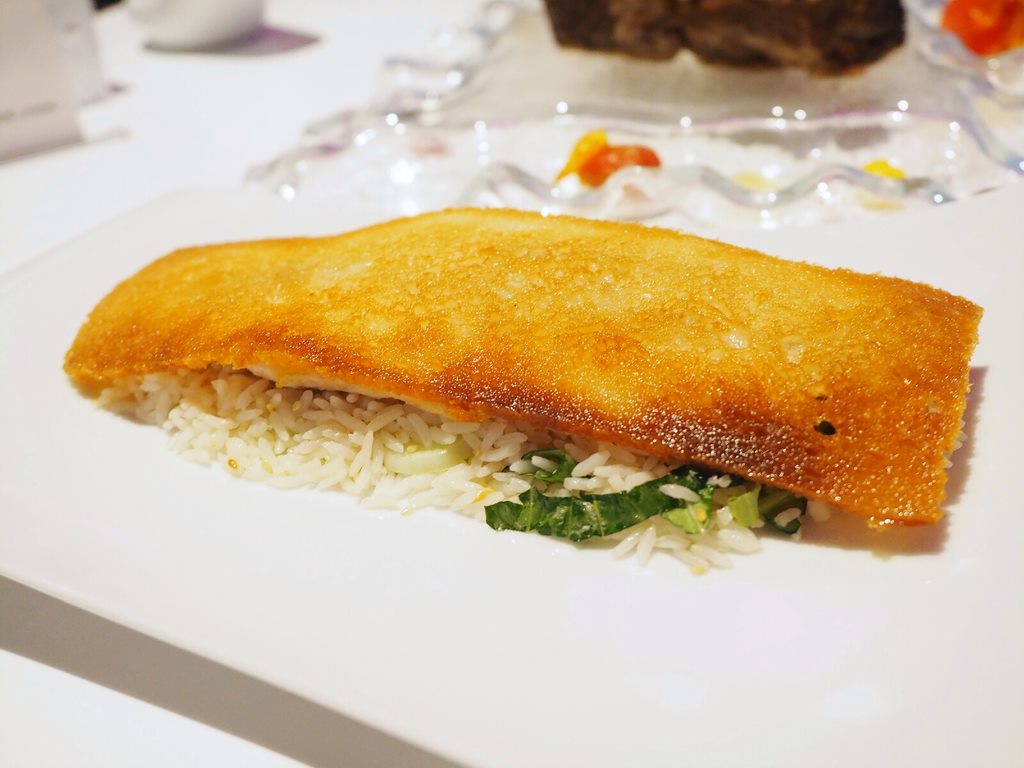 Halibut Cooked in Clear Paper. Not the prettiest looking, but this was the highlight of the dinner in terms of taste Terroir Beef. This piece of medium fatty, 6-hour slow cooked is the epitome of tender 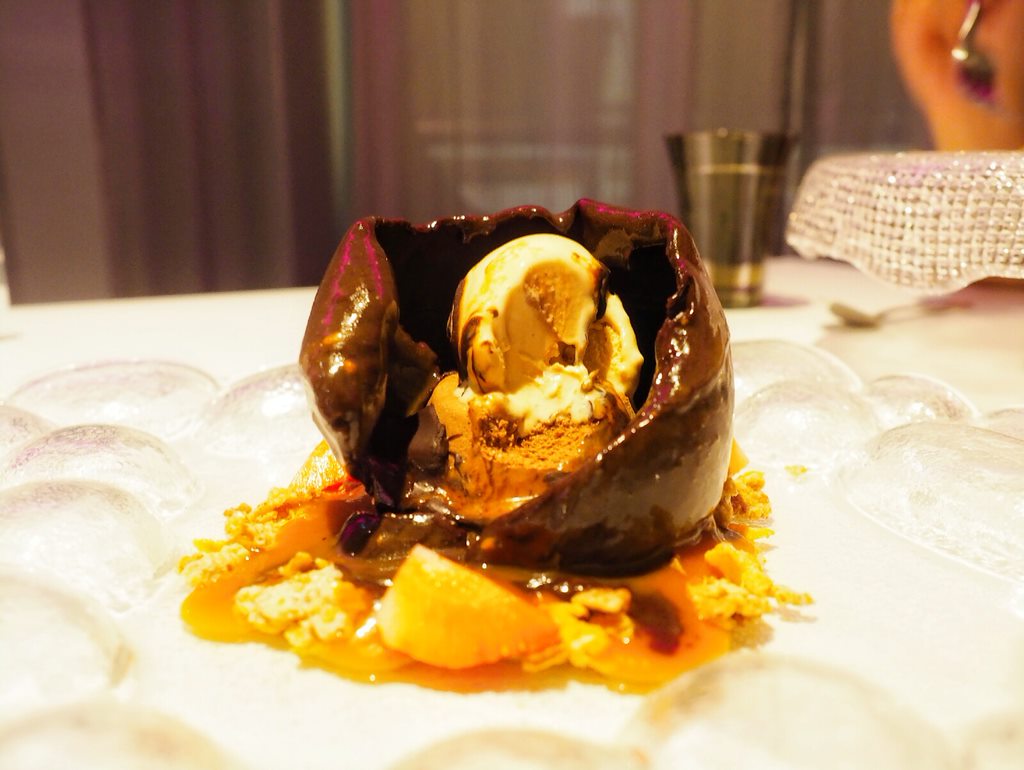 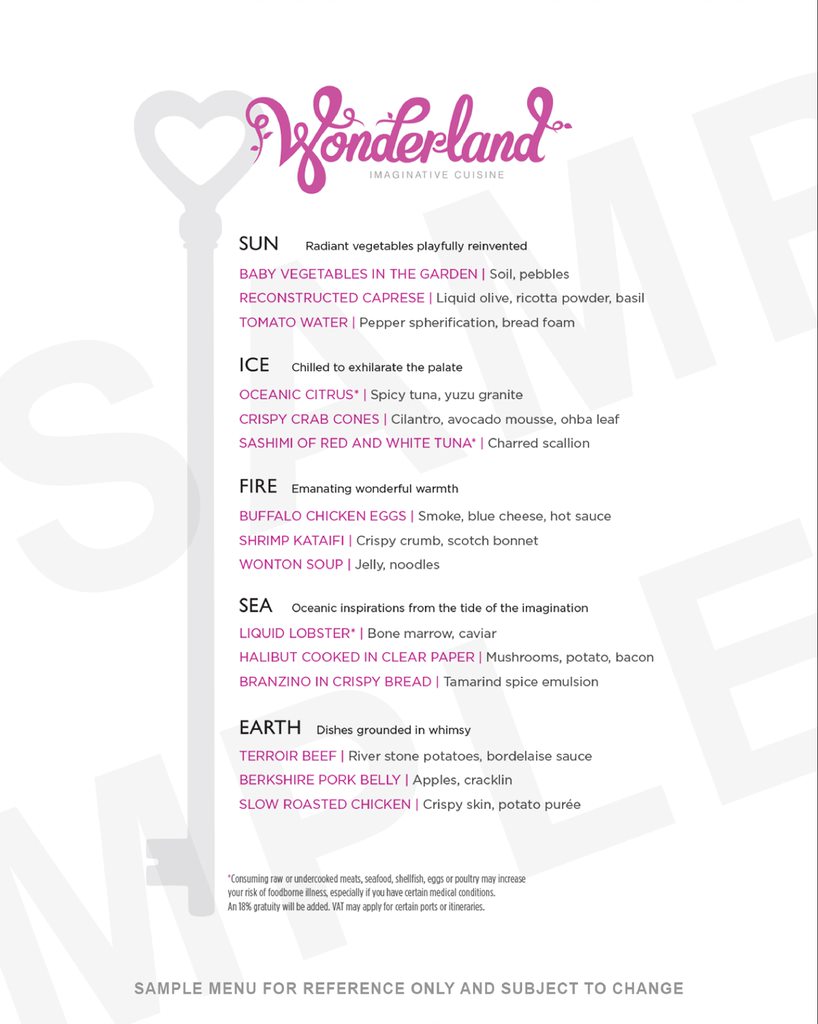